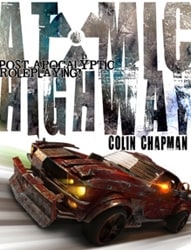 Atomic Highway, from Radioactive Ape Designs is a 2010 ENnie nominated game by Colin Chapman.  The game is published by Cubicle 7, and they were kind enough to send us a copy of the game.  Erik took it upon himself to learn the game, and run it for a select group of people.

A new Dark Age has begun. The descendants of the apocalypse’s survivors scavenge the remnants of the Before Times, struggling to build a new life amidst the ruins of the old. In a savage world where the strong ravage and exploit the weak, the survivors’ settlements are oases, connected only by convoys of armed and armored vehicles that run the gauntlet of raiders… and worse.

R.A.D. was founded in May 2009 by Colin Chapman and exists to produce short, streamlined, fun roleplaying games (RPGs) using the V6 Engine system, tweaking and adjusting it to suit each new game made.

Colin Chapman is a husband, father, teacher, Humanist, and RPG game designer living in Devon, England. Colin welcomes any communication from fans, and while he can’t always guarantee an immediate response, he always tries to get back to folks in a timely manner.

Cubicle 7 Entertainment is primarily concerned with the gaming and media markets. We publish a variety of games (Role Playing, Card and Board games) based on both original and licenced backgrounds.